You’ve probably seen or read or heard that if Paulette Jordan, Idaho’s Democrat gubernatorial candidate, wins in November, she could become the nation’s first Native American governor. But that’s not all. If Stacey Abrams the Democrat running for governor in Georgia wins, she could become America’s first black woman governor. And in Vermont, Democrat Christine Hallquist is running with the hope of becoming the first transgender woman to hold the office.
Welcome to American politics in 2018, where, with the Nov. 6 midterm election not far off, women are shaking things up at the polls, as candidates, as well as newly energized voters.
Molly Kelly’s Tuesday victory in the New Hampshire democratic primary brought to an even dozen the number of women in gubernatorial races across the country, with the prospect of a few more in primaries still to come this month. That’s twice the number of women now serving as governors: Republicans.Kay Ivey of Alabama, Mary Fallin of Oklahoma, Kim Reynolds of Iowa, and Susana Martinez in New Mexico, and Democrats Gina Raimondo of Rhode Island, and Kate Brown of Oregon.
That’s not all. A record number of women – 183, up from the previous record of 167 -- are running for Congress, too, in a surge of interest that followed the election of Donald Trump as president, and in a year marked by the continued fallout of the #MeToo movement. Victories of candidates for the House of Representatives in primaries Tuesday, Sept. 11, in Kansas, Michigan, and Missouri established the latest candidate total, according to the Center for American Women and Politics.
The Womens’ March movement that began the day Trump took office in January 2017 set off a continuing drive to energize and motivate women to seek office. That is being felt in state-level races, too, to the point that many once male-dominated legislatures could swing to give women a majority for the first time.
From an analysis of state legislative candidacies nationwide, Reuters concluded, “Nationally, if women candidates are as successful as they have been for the past two decades - their historic rate of victory is about 60 percent - the number of women in state legislatures could reach an all-time high of about 40 percent. … More women in office could lead to policy changes in areas that women traditionally feel strongly about and generate a new pipeline of candidates for future higher offices, political observers, candidates and fundraising organizations predicted.
Resources
Elle Magazine’s interview with Idaho gubernatorial hopeful Paulette Jordan is here.
Paulette Jordan’s focus on rural voters and issues was described by The Nation, here.
https://www.thenation.com/article/paulette-jordan-is-the-new-face-of-rural-politics-in-america/ Paulette Jordan’s candidacy is among more than 100 Native American bids for elective office in November, according to a report from Indian Country Today, here.
https://newsmaven.io/indiancountrytoday/news/nativevote18-paulette-jordan-for-idaho-governor-among-list-of-100-plus-native-kcr_BX8EVEySikRjLLWLtg/?full=1 The New York Times profile of Georgia gubernatorial candidate Stacey Abrams is here.
https://www.nytimes.com/2018/08/19/us/politics/stacey-abrams-georgia.html The Burlington, VT, profile of Vermont’s gubernatorial candidate Christine Hallquist is here.
https://www.burlingtonfreepress.com/story/news/politics/2018/08/15/christine-hallquist-meet-transgender-governor-candidate/997429002/ The Vox report on the number of women contending for governorships in November is here.
https://www.vox.com/policy-and-politics/2018/9/11/17787668/women-running-governor-2018-molly-kelly-new-hampshire-stacey-abrams-midterms The new record for the number of women running for the U.S. House of Representatives is explained in a Voice of America report here.
https://www.voanews.com/a/record-number-of-women-seeking-seats-in-us-congress/4519080.html The #MeToo Movement is not just an American thing. It is global, as illustrated in a report by The Guardian, here.
https://www.theguardian.com/world/metoo-movement A Reuters analysis of state-level legislative races so far is here.
The rise in women in state legislatures is charted in a report from the Center for American Women and Politics at Rutgers University, here. 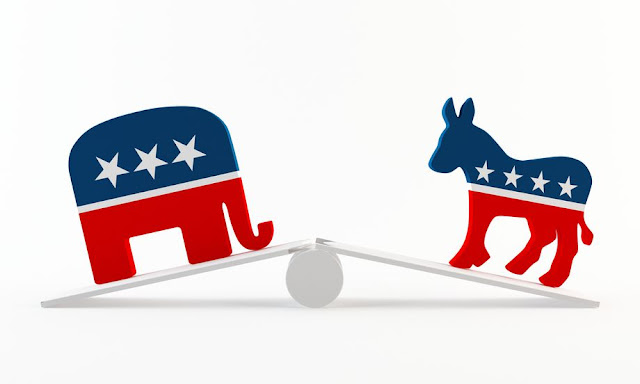 Idaho Voters (More of Them) Ready For the Polls

Voters in Idaho (and three other states) go to the polls Tuesday, May 15, to pick candidates who will contend for a range of local, state, and federal posts in November. Open seats for Congress, governor and lieutenant governor have aroused more interest than usual for an off-year election. That is reflected in the growth of voter registrations, to 809,720 as of May 3, compared with a total of 716,424 registered for the May 2016 primary. Despite some vocal optimism among progressives, however, several candidates are unopposed, and, without some serious write-in challenges, those candidates will advance unopposed in November as well.
Polls are open from 8 a.m. to 8 p.m. Absentee ballots must be returned to county clerks’ offices by 8 p.m. The Republican and Constitution parties have closed primaries, meaning only voters affiliated with those parties can vote for their respective candidates. The Democratic Party is holding an open primary, and anyone can vote for that party's can… 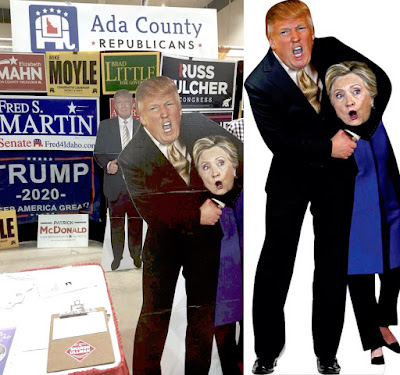 A cardboard cutout of Donald Trump putting Hillary Clinton in a headlock made a brief, tasteless appearance at the Ada County Republicans’ booth at the Western Idaho Fair Friday, Aug. 24, predictably drawing a barrage of critical social media comment before volunteers took it down by the next day.
The Statesman reported that, although the offending poster was no longer on display, it remained at the GOP booth through Sunday for anyone who wanted to take a photo with it away from the booth, citing Anita Leatham, a precinct committeewoman who was on volunteer duty there.
Among critics of the brief presence of the poster was Diana Lachiondo, a Democrat candidate for Ada County Commissioner. On her Facebook page…