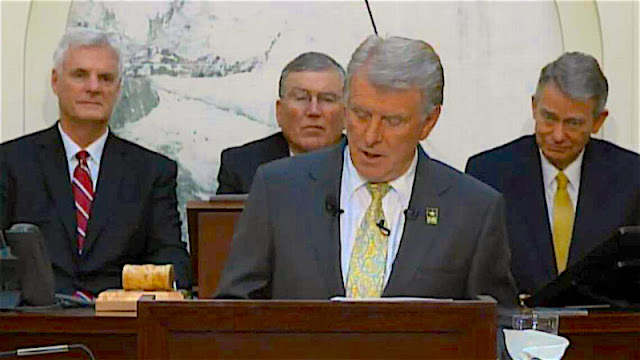 Idaho Gov. C.L. "Butch" Otter told lawmakers Monday his 12 years in office have given him a “more nuanced” view of how government should work as he leaves the Gem State in better condition now than when he first took office, in a tenure of challenges that included natural disasters, political division and economic recession.
"With the benefit of experience earned through the patience and confidence of Idaho voters, today I have a more nuanced view of the proper role of government," Otter said in his 55-minute address. "I have always understood its limitations and its flaws. But now I also know its possibilities, when responsibly led, for helping individual citizens realize their full potential. None of us can afford to dismiss the latter because we are hamstrung by the former."
Otter cited among his top achievements his efforts to improve the quality of public education, replenish state coffers, and attract jobs (Idaho’s unemployment rate in November 2017 was 2.9 percent, 1.2 percentage points lower than the national average).
The governor is proposing a 6.62 percent increase from last year's budget. This would bring the state budget to $3.66 billion in fiscal year 2019, which starts in July. As constitutionally required, the majority of the proposed budget is earmarked for education, including a 6.03 percent, or $123 million, increase in funding for public schools, which includes $42 million more for teacher's salaries.
As were his priorities during his first State of the State address in 2007, tax cuts and education highlighted the majority of Otter's agenda for the upcoming legislative session. Otter proposed a $200 million tax cut package that includes reducing the state's income and corporate tax rate, as well as adding an $85 child tax credit.
The proposals come as tax officials warn state lawmakers that Idaho taxpayers could end up paying nearly $100 million more next year as a result of the Republican tax overhaul that President Donald Trump signed into law in December. Otter’s budget calls for conforming Idaho’s state income tax code to federal-level changes, which grows state revenues by $97.4 million. But at the same time, he’s proposing nearly $200 million in tax cuts – a cut in all the state’s income tax rates of 0.45 percentage points, which would drop the top rate from 7.4 percent to 6.95 percent; and an $85 non-refundable Idaho dependent credit from state income taxes. Between those tax cuts and the increased revenue from conformity, the net result is a reduction in revenue to the state of $94.7 million.
Arguably the most highly anticipated element of the governor’s address, given his call for tax reductions, was his list of proposed spending priorities for the fiscal 2019 budget:
• A 3-percent pay increase for state employees. His proposed spending plan also includes the following:
• Creation of a new position, CEO of Idaho’s higher education institutions.
• $28.8 million ($17.4 million from the General Fund and $11.4 million from the Millennium Fund) to establish an Idaho Health Care Plan, which would allow insurance companies to offer more affordable, but less extensive, health insurance plans.
• Nearly $42 million for the fourth year of a K-12 teacher career-ladder salary system.
• $6.5 million to expand literacy intervention efforts for Idaho school children.
• An additional $5 million for college and career counseling. • An additional $10 million for school technology, bringing the total annual investment in technology to $36 million.
Lawmakers generally reacted favorably to Gov. Otter’s speech. Rep. Luke Malek (R-4A, Coeur d’Alene) praised it as “fantastic” and said fellow lawmakers should adopt Otter’s tone for the 2018 session. “We should be able to get a lot of good things done for Idahoans,” said Malek. “I think Gov. Otter really captured the importance of taking action at the state level.”
Fourth District Sen. Mary Souza, (R-Coeur d’Alene) said she could see the emotion Otter felt in what amounted to his “farewell address,” “He pointed out some great accomplishments in growth in the state and proposed some increases in education spending,” Souza said. “I want to take a close look at those and see what the options are going to be. I want to know more about his education CEO proposal. He didn’t talk about taxes, and that surprised me.”
Otter said some of Idaho’s most important public policy issues in the coming years will involve making health care more accessible and affordable, and ensuring employers have enough educated, trained and skilled workers to meet the needs of the state’s growing economy.
“Because of the work we have done over more than a decade, we have never been readier for the challenges and opportunities ahead,” Otter said.

What’s Ahead?
The Idaho Legislative Calendar for the 2018 session is here.

Video of Gov. Otter’s address, as published by The Statesman.com Website, is here.


The LegiScan running account and archive of activities of the Idaho Legislature is here.

Despite efforts by key Republican congressional committee chairs to restrain, if not end, the ongoing FBI investigation of Russian interference in the 2016 U.S. presidential election, evidence continues to flow, with the prospect President Donald Trump himself could face some form of interview or questioning in connection with the probe. Trump himself told reporters Wednesday, Jan. 10, there was “no collusion” between his campaign and Russia, and thus such an interview wouldn’t be necessary, apparently missing the fact the investigation is not simply about the question of “collusion.”
The president's comments We… 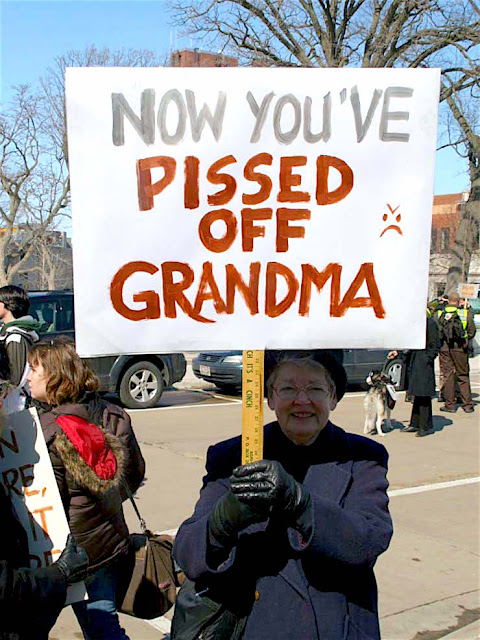